As cryo-EM adoption has grown so has the demand to prepare specimen using conventional commercial instruments and DIY set ups. However, most samples exhibit non-ideal behavior and the resulting specimen rarely achieve the reproducible and traceable consistency needed to drive optimization towards improved outcomes for detailed structure determination. The need to routinely optimize for sample specific behavior for improved specimen quality is widely recognized as a key unresolved step in the workflow and restricts the use of cryo-EM in novice hands.

Conventional sample optimization for cryo-EM utilizes multiple instruments, consumables originating from various manufacturers and user dependent experimental methods to deal with the detrimental effects brought about by protein interactions with the air-water interface. There are not yet any optimization workflows specific to sample type. Only a consensus that optimization is required for most samples and that approximately ten different methods, each with an optimization routine of their own, will be attempted in combination before improvement is seen. Additionally, none of the currently available methods can be determined to work in advance of sample preparation.

An abundance of low-quality samples causes downstream inefficiencies in the workflow. Bottlenecked microscope and computing resources and increasing costs (time and money) result in a failure to achieve early research milestones important for funding and resource allocations.

Optimizing Vitrification for Your Sample-Specific Behavior

A common effect of conventional slow (>1 sec) blotting or pin printing techniques is up to a 30-fold increase in sample concentration at the air-water-interface. The resulting interactions lead to denaturation, which is pronounced for less stable proteins, and can result in limited particle orientations and distributions necessary for structure determination. Low sample quality results in limited achievable resolutions and the need to collect extremely large data sets with a very low percentage of particles remaining in the resulting reconstructed maps.

A known feature of high-speed spraying devices is reduced particle adherence at the air water interface. Therefore, the observable concentrated particle density at the air water interface decreases when applying faster dispense-to-plunge times for a sample at a given concentration. The effect is non-linear and likely results from a combination of molecular characteristics that influence the rate of adsorption along with the subsequent formation of a denatured protein network or film with secondary characteristics. The relationships are sample dependent and early use suggests an understanding of this effect for each sample is critical to determining an optimization pathway towards improved sample quality for high resolution. 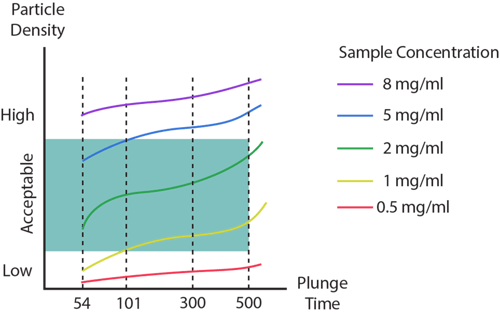 Rather than eliminate all interactions between protein and the air water interface, since it is impractical to outrun protein adsorption entirely, routine chameleon protocols target a range of discrete fast dispense-to-plunge times to initially characterize sample behavior with regards to concentration, wicking speed, film thickness and observable particle density and then optimize based on outcomes.

How Do I Make chameleon Work for Me?

Approaching the chameleon with a new sample requires a first step to determine the fastest plunge time possible for a given sample concentration without particle density dropping too low. Using the sample concentration in hand the system is directed to prepare a few grids at a range of reducing plunge times. Typically, the plunge time range will start at > 500ms for observable particle densities comparable to conventional methods. Early results show improved quality at a range of sample dependent plunge times (1000ms – 54ms) for a variety of samples.

Fig. 2 Concentration and specimen size will determine what dispense-to-plunge times are appropriate.

The starting plunge time of ~500ms, slow by chameleon standards, represents a 6-10x reduction in dwell time compared to other commercially available sample preparation instruments. Therefore, the evaluation of ‘slow’ and ‘fast’ plunge times along with film thickness from ‘good’ to ‘over-wicked’ is necessary to determine optimal conditions for the sample at hand.

After gaining an understanding of the appropriate plunge time range and ice thickness for the sample concentration and characteristic behavior, a second freezing session with a set of much more stringent acceptance criteria corresponding to a narrow range of plunge times and film thickness can produce multiple examples with consistent outcomes.

A Paradigm Shift Towards the Future

The routine optimization protocol available through chameleon represents a paradigm shift by addressing the unique sample dependent air-water interface effects by adjusting the vitrification step to the sample behavior instead of requiring researchers to introduce additional methods and optimization cycles to modify sample behavior to accommodate standardized plunge freezing devices.

To be able to capture biochemistry consistently and confidently researchers need the ability to freeze where and when the biochemistry is carried out, placing the requirement for change squarely on the sample preparation devices to modernize, improve ease-of-use, and generate high quality outcomes efficiently to achieve early milestones routinely.