The period responsible for the current generation of cryogenic electron microscopy (cryo-EM) instrumentation and image processing software is often referred to as the “resolution revolution.” The results of these technological advancements have been achievements in higher quality structures and cryo-EM becoming the go-to method for structural biologists. While it has been demonstrated that conventional plunge-freezing can achieve atomic resolution on the latest electron microscopes with ideal specimen, real world results still struggle to break the resolution barriers needed to answer the detailed biological questions at hand. To keep pace with the rapid advances in current hardware and software capabilities, next generation sample prep methods are realized on emerging instruments such as the chameleon to minimize endless sample optimization workflows and enable routine high-resolution reconstructions.

Bringing together, robotics, automation, and intelligent software allows experts and novice users alike quicker access to consistent results. Users can confidently work with the instrument through a terminal and control the process with guided software protocols intended to handle the experimental framework and limit manual intervention. 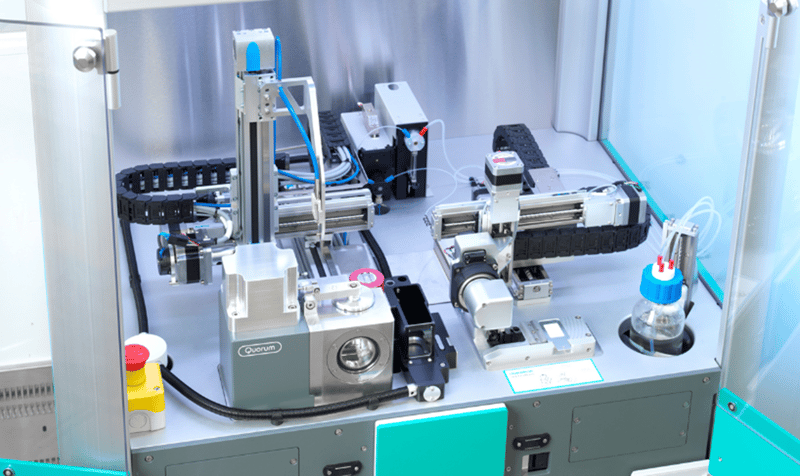 The chameleon achieves this automation through the novel design of picolitre dispensing onto self-wicking nanowire grids. Reducing the deposited sample volume and eliminating the blotting step allows for an advanced degree of control over the thin film formation step and subsequent vitrification quality. Furthermore, this rapid process allows the chameleon to address air water interface (AWI) effects with dispense-to-plunge speeds as fast as 54ms compared to a few seconds with previous generation commercial instrumentation. 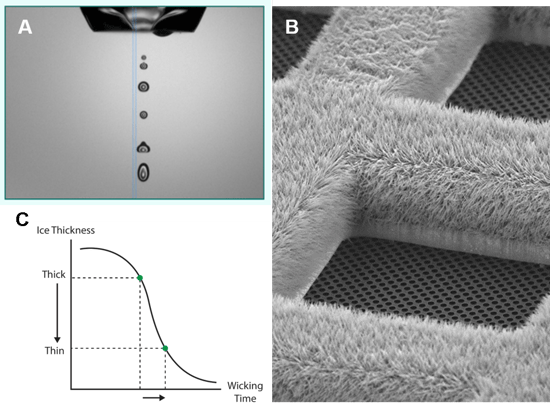 B) Scanning electron microscope image of a self-wicking nanowire grid

The one size fits all approach of traditional blot and plunge freeze methods does little to address sample specific characteristics and reduce variability. The resulting inconsistent ice quality and unmitigated air water interface effects lead to unnecessary screening along with experimental repetition with untraceable results. Incorporating chameleon into the cryo-EM workflow represents a paradigm shift in how we approach the bottleneck of specimen optimization and screening.

To reduce the number of research cycles necessary to define a clear path to success, the first step should be to achieve reproducible high-quality specimen such that sample behavior can be characterized in the same initial screening session. The chameleon reduces the screening load on cryo-EM infrastructure by allowing researchers to control and then screen for film thickness using onboard cameras during sample vitrification. During the expensive cryo-EM screening step, loading specimen with only good ice can further reduce costs associated with the time-consuming process of searching many grids with inconsistent non-uniform ice quality on each.

Through the benefit of advanced instrumentation and methods, we now know AWI effects to be ubiquitous and sample specific. It has been shown that addressing the rate of particle adsorption to the air water interface can have beneficial effects, improving data quality and therefore reducing the amount necessary to achieve high-resolution reconstructions. The chameleon can produce multiple vitrified grids in a single session at different dispense to plunge times resulting in a set of specimens to screen for unique sample behavior related to the rate of adsorption to the AWI.

Once information is gained about resulting concentrations of particles amenable for data collection and rates of air water interface effects, subsequent chameleon sessions can be customized and directed to mitigate the unique sample behavior by either plunging faster or slower.

Customized vitrification protocols based on unique sample behavior can build on an expanding knowledge base emerging from the cryo-EM field to further eliminate the sample optimization bottleneck. As an increasing number of new samples are run on chameleon we can learn about shared sample characteristics with regards to air water interface effects and categorize behavior towards customized vitrification protocols. This shift in thinking represents a transformative first step to allowing sample specific workflows for cryo-EM preparation optimization.

The emerging published results from chameleon have shown that reproducibility and improved sample quality translates to cost savings across the entire cryo-EM workflow. Whether you are just getting started in cryo-EM or looking to solve a particularly difficult sample, at SPT Labtech we have an expert team of scientists with years of experience in the cryo-EM field ready to lend a hand. Contact the SPT Labtech team today to learn more about the chameleon cryo-EM workflow.