The preparation of acceptable frozen-hydrated samples on transmission electron microscopy (TEM) grids is well known to be a challenging bottleneck in the cryogenic electron microscopy (cryo-EM) workflow. During sample vitrification it is assumed that the solution contains biological macromolecules that are distributed randomly and in suspension. Until recently it was generally accepted that the sample particles remained identical to those in bulk solution. However, in most samples prepared using conventional techniques we know that this not the case. Purified and biochemically optimized sample may not survive the standard method of blotting to make thin aqueous films for vitrification. The result is a necessary trial and error workflow using a series of experimental adaptations to find the optimal conditions for each unique biological specimen.

The conventional method of specimen preparation starts with the application of sample to a TEM grid followed by a blotting step to remove excess liquid, forming a thin aqueous film suitable for plunge vitrification into liquid ethane. The idealized specimen assumes the resulting distributions of particles in the thin vitreous layer are identical to that of bulk solution in areas where the ice itself is neither too thick nor too thin. In practice, initial success is rare, and optimization is often necessary to deal with ice variability and detrimental sample dependent behavior.

The standard cryo-EM workflow involves an iterative process of freezing many grids of varying quality and then screening for successful specimen using a cryogenic electron microscope. Since microscope resources can be expensive and hard to come by, the resulting costs and prolonged research cycle limits the efficiency of specimen optimization pathways. 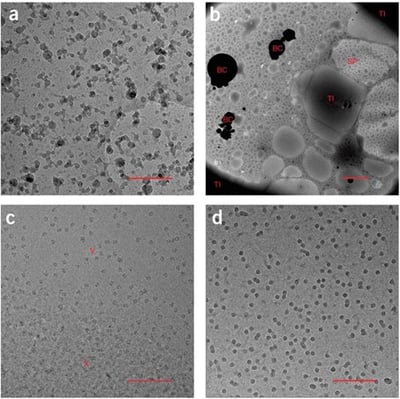 Plunge freezing by conventional methods requires the manual handling of small fragile grids under liquid nitrogen conditions. The quality of resulting specimen grids is often user dependent leading to poor consistency. Furthermore, experience with cryo-EM is necessary to determine ‘good’ or ‘bad’ sample quality as outcomes are inconsistent and varied in nature.

It is a well-known good practice to avoid air bubbles during the handling of bulk protein solutions due to denaturation at the air-water interface (AWI). In the context of thin film formation for sample vitrification, the increased AWI surface area leads to 1000 or more AWI collisions per second for specimen thickness at 100nm or less.

Representations of the differences between desirable preparation outcomes relative to the AWI, (A), and a variety of undesirable outcomes (B-F).

Therefore, it is likely that particle interaction with the AWI is the main cause of issues resulting from extremely thin sample formation on the specimen grids. Those undesirable issues being limited particle orientation and distribution, degradation, and aggregation.

Due to advancements in microscope imaging and data analysis software we have more information available to assess the underlying causes of sample preparation failure. Air water interface interactions have been experimentally determined to be ubiquitous to samples prepared using standard methods. Conventional sample preparation for cryo-EM requires optimization in almost all cases and none of the existing optimization methods works consistently well for different kinds of specimen.

There are a variety of experimental methods meant to deal with standard specimen preparation failures for the sample at hand. However, there are not yet any optimization workflows specific to sample type. Only a consensus that optimization is required for most samples and that approximately 10 different methods will be attempted in combination before improvement is seen. Additionally, none of the currently available methods can be determined to work in advance of sample preparation. Although in experts’ hands, experience can lead to a few common-sense first steps.

The Future of Sample Preparation for Cryo-EM

Next-generation sample preparation available on chameleon employs a blotless method, automation, and speed to outrun the effects of particle adsorption to the air water interface while standardizing ice quality and thinness in the hands of novice users. Optimizable vitrification for unique sample behavior can reduce the time and costs associated with trial-and-error experimental optimization necessary using traditional methods.

In the next post we will explore how characterization of the unique sample dependent effects of the air-water interface can lead to efficient optimization pathways and open doors to sample specific workflows for cryo-EM specimen prep.